The inner nucleus is hydrophilic (water loving). This means that, when it’s not under compressive force, it draws in water causing the disc to swell in size. This happens every night while we sleep and is the main reason we are taller first thing in the morning. 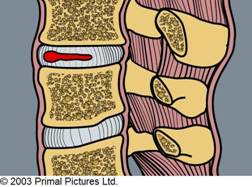 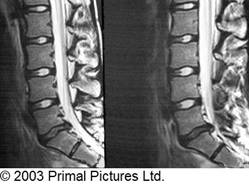 Despite obvious trauma and faulty postures, other factors have now been demonstrated to be associated with the development of disc herniations in the low back, including a family history (3), sedentary occupations(4), obesity(5), smoking(6) and ages between 30-40 years. This latter finding can be explained by the disc still being hydrated yet having had enough time to accumulate some repetitive strain.

Where do disc herniations occur in the lumbar (low back) spine?

About 90% of lumbar disc herniations occur at the two lowest discs, which are positioned between the L4/L5 and L5/S1 vertebrae, and 93% of these herniations protrude into the spinal canal. Unlike early theories regarding disc herniation, rarely does the injured disc itself cause direct compression to the exiting nerve root. Instead, it is now considered that an uncontained disc herniation is seen as foreign by our bodies and an immune response is mounted, similar to an inflammatory response produced after exposure to a flu virus, etc. It is these inflammatory agents which are toxic to the nerve root resulting in direct irritation, localised muscle guarding and “sciatica”.

SYMPTOMS OF A LUMBAR DISC HERNIATION/BULGE

There can be a large variation in the severity of pain with lumbar disc injuries and resultant nerve irritation ranging from severe back, buttock and leg pain, pins and needles, muscle weakness in the legs and changes in urinary habits/bowel movements, to no obvious symptoms at all.

This can be explained because it is only the outer 1 to 3 mm of the disc which is pain sensitive. Furthermore, it is the extent of the chemical (from inflammation) or mechanical (from direct pressure) pressure which determines the severity of the nerve symptoms. Such that, nerve roots are adapted to withstand a degree of mechanical or chemical irritation, however, once this threshold is exceeded, symptoms will be felt by the patient.

The symptoms derived from irritation of the nerve root is defined as radicular pain. This pain is often described by the patient as one-sided, constant, dull “toothe-achey pain”, which can occasionally be sharp and lancinating in character. It often follows a distinct pattern within the lower limb, which is defined as a “dermatomal” distribution. There may also be changes in sensation, such as numbness or pins and needles.

The symptoms described by patients often relate to aggravating positions which increase the pressure in the discal material, namely sitting, standing, coughing, sneezing, etc., or with manoeuvres which increase the traction on the nerve roots, i.e. straightening the leg, etc.

ASSESSMENT AND DIAGNOSIS FOR A LUMBAR DISC HERNIATION/BULGE

An MRI scan is also an extremely beneficial tool to aid in the diagnosis of disc injury and provides information on the severity of the injury and degree of neurological compromise. The MRI scan takes two- and three-dimensional pictures of the spine using a large magnet and radio waves. The patient is most commonly placed on their back and slid into a small tube containing very strong rotating magnets for approximately 20-40 minutes.

It is important to note that MRI scans cannot be relied on solely and must be compared with clinical findings and symptoms before any intervention/treatment can be considered.