The hip joint is the closest example to a ball-and-socket joint we have in the human body. The ball is formed by the head of the femur (femoral head), which is located at the top of thigh bone. It forms approximately two thirds of a sphere. The socket is located at the lower lateral part of the pelvis known as the acetabulum. This design allows a good range of movement and excellent stability. 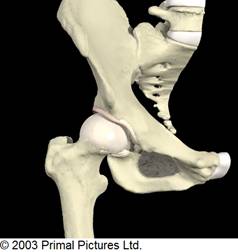 This diagnosis refers to disruption of the acetabulae labrum. This is a ring of tough fibrous cartilage which is firmly attached to the acetabulae rim. The labrum serves to deepen the socket and make it smoother in appearance, thus increasing the joints stability and reducing friction between the ball and the socket. It is thicker superiorly, as it has to deal with compressive stress when weight-bearing (standing).

If the labrum was removed, it is estimated that the frictional force between the femoral and acetabular surfaces would greatly increase, by up to 92% (7).

The labrum may be injured by:

Given these mechanisms, it’s not surprising that this complaint is also referred to as “footballer’s hip”. Patients often describe a clicking or locking and pain in the groin, buttock and outside area of the hip. 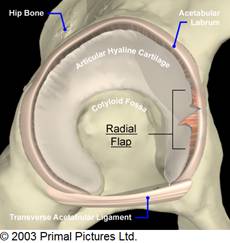 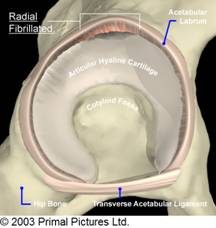 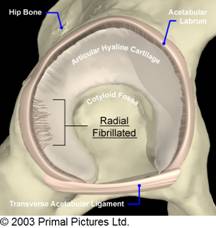 Labral tears are not considered a common diagnosis, so it’s very important that other alternative diagnosis are ruled out first. It’s not a bony type injury, so x-rays are rarely useful. MRI scans are more sensitive, but often they are only picked up through hip arthroscopy, which involves putting a camera in the joint via key-hole surgery. It’s thought that, due to the difficulty in diagnosing this complaint, they are under reported, so they may be more common than we currently think – and when a patient reports recurrent hip pain, it should be considered a possibility.

The majority of the labrum doesn’t receive any blood supply, meaning it’s not particularly good at repairing. However, the outer area does receive a small amount and can sometimes repair with relative rest. Surgical options normally involve debridement (cutting away the damage part of the labrum) and, very occasionally, a repair (sticking down the torn cartilage).